The Effingham Minis U10’s are coached by a dedicated group of volunteer parents who have attended RFU training courses. We make the sessions fun and rewarding, encouraging the RFU ethos which is TREDS – Teamwork, Respect, Enjoyment, Discipline and Sportsmanship. The season is a mix of training, joint training and festivals. Training and Festivals start at 10am unless otherwise stated.

We are not a childminding service, whilst your child is playing we look after them. Once training is over a parent or guardian is expected to collect their child promptly.

Players and match officials must also ensure that RFU Regulation 15 http://www.englandrugby.com/governance/regulations and the IRB Laws of the Game, modified by the Rules of Play, are observed when playing rugby at Under 10.

School Rugby: The Under 10s Rules of Play set out below are discretionary only in school rugby but the RFU will continue to work with IAPS and the ERSFU with a view to eventually converge the schools’ Rules of Play with those of club rugby. The previous Rules of Play that can still be played by schools can be found at http://www.englandrugby.com/governance/regulations.

Any terms defined in these Rules shall have the meanings set out in the IRB Laws of the Game.

The key elements of the Under 10s Rules of Play are:

6. The Tackle, Maul and Ruck

a) A scrum will be awarded for:

d) The scrum is uncontested and the team awarded the scrum will throw the ball into the scrum. Neither team may contest or push and only the side throwing the ball in may strike for the ball.

e) Front rows must not charge at each other. If they start to set too close together and with their necks and backs bent, the scrum must be stopped and the scrum reformed. Props’ body positions must be parallel to the touchline , their head and shoulders must be no lower than the hips and there must be no downward pressure exerted. Shoulders must always be above the level of the hips.

Note to referee: Although unlikely at this age, referees and coaches MUST be aware of the following: If the scrum collapses, the whistle must immediately be blown and the appropriate sanction awarded or the scrum reset. If a player is persistently involved in collapsing or illegal binding, they must not take any further park in the scrum or if a player’s lack of technique or strength is a danger then they must be replaced. All players, including replacements, should be suitably trained and experienced. 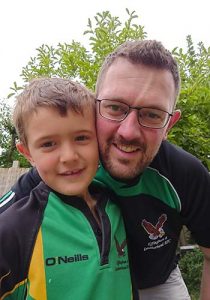