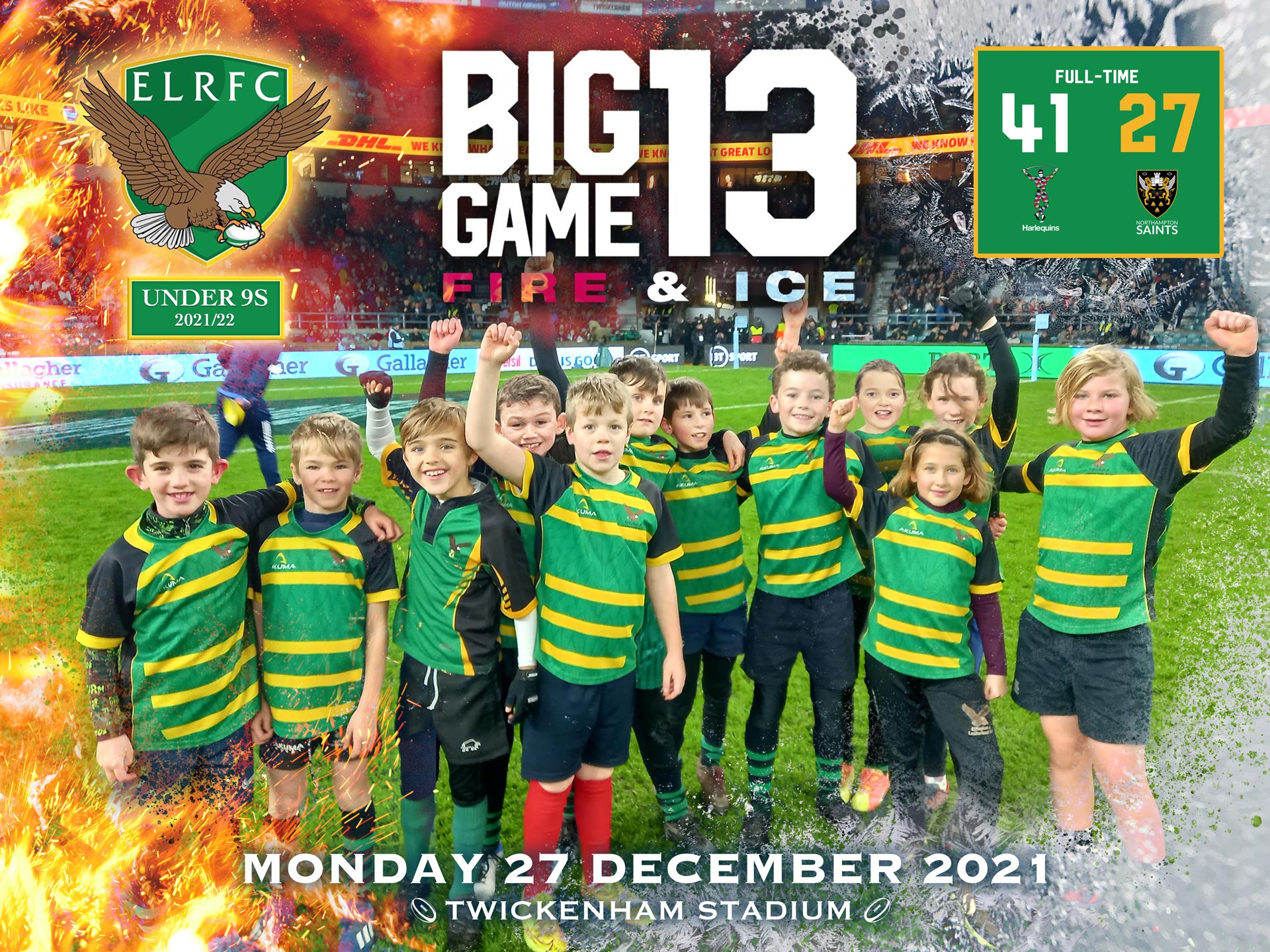 Post Christmas 2021, did not bring the expected Boris-imposed lock down on England and instead allowed the Effingham and Leatherhead RFC to attend the annual Big Game at Twickenham.  This, the 13th iteration of the Big Game, saw for the first time a double header played which featured both the current English Champions being the Harlequins Women and Men’s teams who took on the on Wasps and Northampton Saints respectively.  Spliced in between the two matches would be a dance set DJ’d by a near-pensioner Pete Tong, bringing back many happy memories for those older members of the ELFRC contingent.  Some witnessed the club chairman up in his seat having a little boogie. No images will be shared.

Anyway, let’s start the day at The Nest where the bar was open early for pre-departure drinks and was a great pick-up point for the two, yes two, coaches for travel to Twickenham Stadium.  Coaches were boarded with nerves settled by the early drinks but still lots of excited chatter about the fact that our very own under 9s would be the star attraction at half time, playing a game of touch on the hallowed Twickenham turf.

Coaches arrived in good time to allow the 150+ ELRFC members to find the bar nearest to the block of seats and settle a few more nerves.  Most managed to take their seats in time for the ‘Fire and Ice’ pregame display which climaxed in DJ Pete Tong releasing, by way of a pick axe, the match ball from a block of ice.

The match finally started. Harlequins and Northampton had fortunately read the script and knowing the under 9s would be departing on 20 minutes to prepare for their match, they decided defending was optional and five tries were run in before 19 minutes showed on the clock.  On 20 minutes, illustrious Head Coach of the under 9s, Andrew Scattergood, got nervously and a little wobbly to his feet, gathered his 12 players for the long walk to the opposite corner of the ground.  If the players had any pre match nerves on the walk round it didn’t show as they ran, hugged, jump and shouted with delight.

As Harlequins finished the first half with yet another try to take a half time lead of 26-24, the ELRFC under 9s entered the pitch in front of 73,000 fans, most screaming “Eagles, Eagles, Eagles”…  They ran to the pitch nearest to their adoring support and got stuck into a game of 12v12 touch against Worthing RFC.  ELRFC scored the first try to a deafening cheer from those watching from the stands.  Their dominance continued and although we don’t keep score at this age, they all assured their head coach that they had won and won well, tears welled in his eyes but he claimed it was rain.   It was over in 10 minutes, pictures were taken on the pitch, smiles all around, memories for a life time and the most excited bunch of eight and nine year olds ever bounced off the pitch and embarked on the long walk back to their seats.  On their return they were greeted with yet more cheers and possibly a few parental tears.  This won’t be the last time these players grace the turf at Twickenham.

Harlequins continued to dominate the second half and satisfied the crowd with a 41-27 win which sent the ELRFC on their way into the dark, wet night extremely happy.

Coaches were boarded shortly after the match for the return journey with the excitement giving way to tired bodies and sleepy eyes, players and parents alike.  Irreplaceable memories had been made and a deeper love of rugby born.