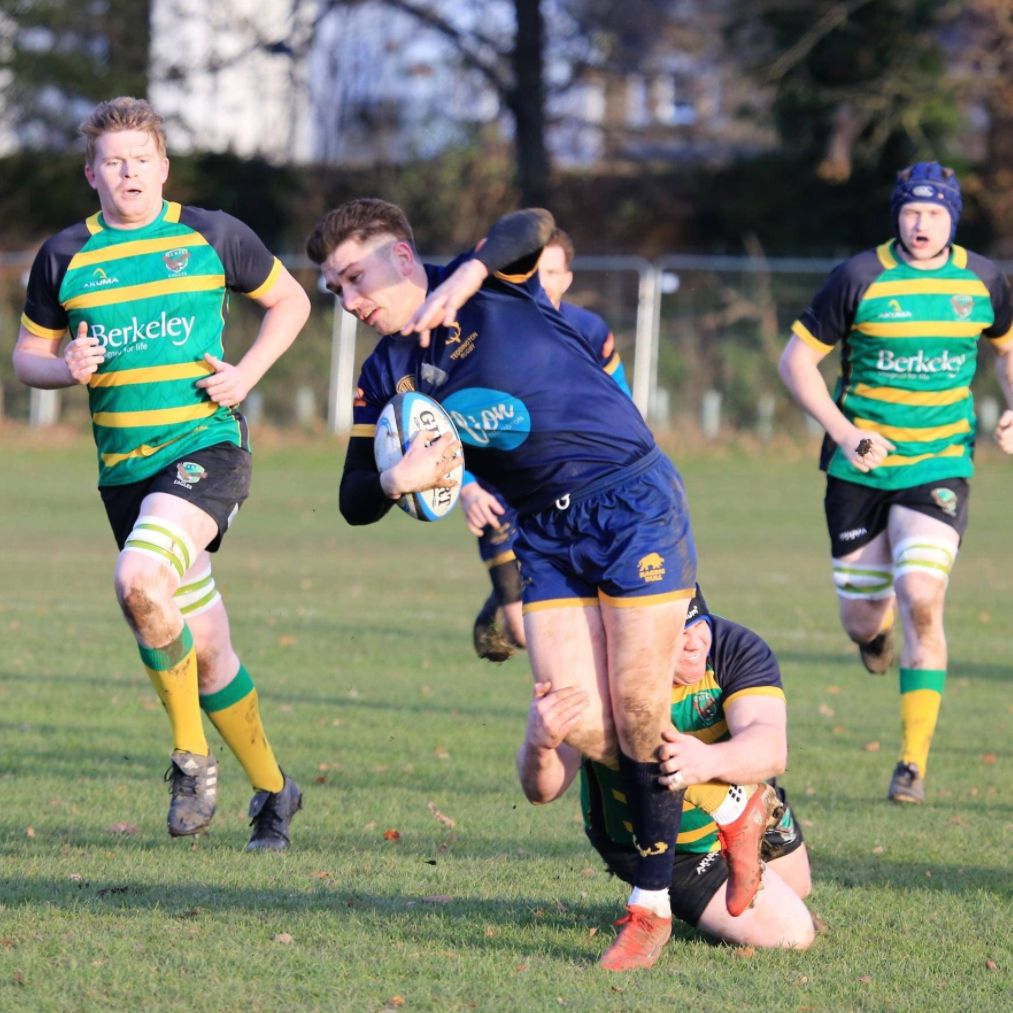 A pulsating encounter In Bushy Park saw Teddington run out winners and stave off a late comeback from Effingham and deny them a losing bonus point.

Playing with the elements at their back, Effingham started brightly with strong ball carries from forwards Sam Maycock and Ben Tame resulting in an off side penalty which fly half Sam Manning despatched to start the scoring.  Moments later the home side attempted to run out of their twenty two but indecision in the back line saw the  ball intercepted by Effingham winger Selous Nicolle who touched down near the posts for Manning to slot over the extras.  Teddington hit back when a delayed pass from their fly half saw the centre race over to open their account with a 7 pointer.

Effingham kept the pressure on and slick handling in the backs saw Matt Manning feed his brother AJ who went in at the corner and Manning beautifully converted.  A further 2 Manning penalties saw Effingham establish a healthy lead of 23 – 7 but Teddington were beginning to find their rhythm and another centre bust saw then score out wide.  On the stroke of half time Teddington scored the try of the half when a catch and drive line out splintered the Effingham pack and marched them back 20 yards before the ball was moved outwide for the winger to go over for a try which was beautifully converted.  Half time was 19 – 23 in Effinghams favour but the conditions were not.

Teddington soon established an early second half lead when they scored two quick tries as they began to squeeze the Effingham pack forcing errors which saw a succession of line outs and scrums to eventually lead to tries.  A third Teddington score saw them establish a 36 – 23 lead but Effingham fought back and a Manning penalty was swiftly followed by a siege of the Teddington line with excellent ball carrying from second row Matt Baldwin and Craig Hutchison.  The ball was shipped to Sam Manning who put in a lovely cross kick to winger Nicolle who scrambled over for the score which was converted.

Effingham had clawed their way back into the contest but as they tired the mistakes were inevitable and a knock on from the kick off saw Teddington go in for the final score to take the victory 44 – 33.